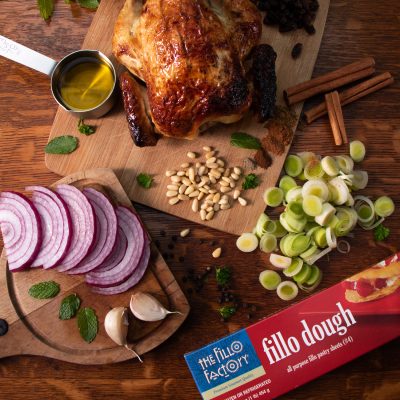 When I made this recipe,  written for us by Diane Kochalis, I had only one expectation. It would be great.  I read through the ingredient list and not having been raised Greek, couldn't quite get a sense of the overall final flavor.   So I followed it verbatim, which is unusual for me.  There is some security in following a recipe without taking personal detours.  Coming clean, in full disclosure, I will tell you am a vegetarian, and I am not Greek...

Diane's recipes are often traditional ones imbued with her particular touch.  Which makes her such a great chef. She can leave her mark in the smallest of ways.  The finished pie, was light and unlike anything I have ever eaten.  Yes I am a vegetarian.  But I did taste the sauce and experience the aroma, and if there was a dish I would cave in on, it would be this one.  So rejoice chicken lovers! This is a recipe you will be making more than once.  If you skip to the bottom of the post you will find a video of Diane Kochalis showing the process she used to make this scrumptious Chicken Pie.

1. Heat 2 tablespoons olive oil in a large, wide pot or deep skillet and cook the leek and onion until soft and lightly browned. Stir in the garlic.

3. Lightly oil a 12-inch round baking dish or tart pan. Preheat the oven to 350F/ I SOC. Layer the first fillo sheet on bottom of pan and brush with olive oil. Place the second one on top at a slight angle, so that it overlaps the first but widens the overhang, like a fan, in other words. Continue with four more sheets, oiling each. Spread the chicken mixture evenly over the surface, pressing down with a spatula. Cover with 5 sheets of fillo, layering and oiling each as for on the bottom.

4. Using a kitchen shears or sharp paring knife, cut away all but about 1-1 /2 inches of the excess overhang. Pick up the bottom and top sheets, press together and fold inwards to form a decorative rim. Brush the surface generously with olive oil. Place a small round plate in the center of the pan and score around it. Score even-sized slices in a radius from the inner circle to the edge. Sprinkle with cold water and bake for 45 minutes or until the fillo is crisp and golden. Remove, cool, and serve.

The Fillo Factory was proud to be a sponsor of 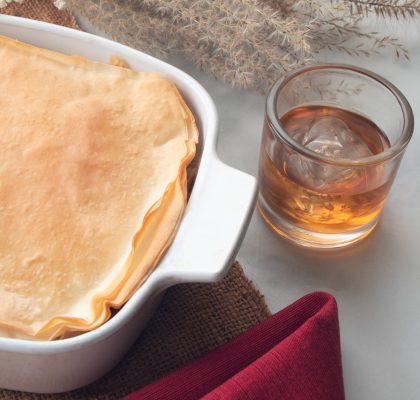 A Chicken Pot Pie to Chase the Chills Away. 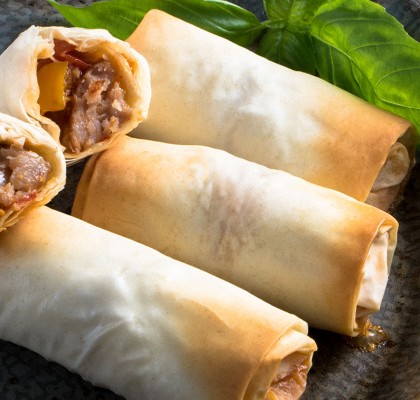 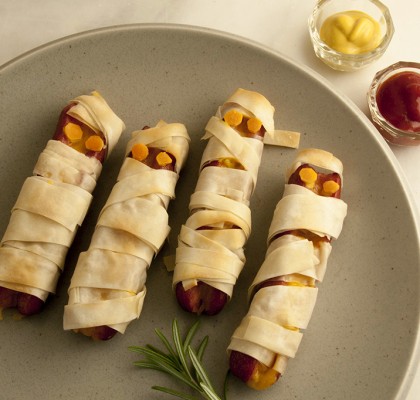